Funimation kind of sucks when it comes to Dragon Ball Z. Outside of a couple used DVD’s and VHS tapes I bought in my late teens and maybe early 20’s, I have never purchased a Dragon Ball Z home release outside of some movies a long time ago. Every time I turn around, there’s another new release… some of these things can not be helped, such Dragon Ball Kai being a thing, but *sigh* I just never knew what to buy!

Different dubs, different voice actors, censored TV versions, croppings, etc. I was finally going to start collecting a version of it, when they announced the super limited 30th anniversary HD edition version that was limited to 3000, but then changed to 6000. It has a stupid unpainted Goku statue, an art book, and costs $350. 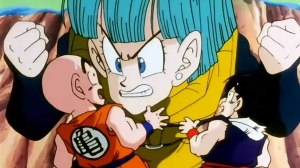 The $350 collection is controversial as there are cropping and filter concerns that appear to be making the image smaller and the finer details looking less detailed.

I can’t help but feel like Funimation has been milking Dragon Ball Z far too much with all of these different versions. That plus Funimation adding fuel to the bonfire of the  #KickVic movement… just *sigh* Funimation really should have gone with their gut instinct when they had their first investigation of Vic Mignogna and just not used him as Brolly.

I think the movement would have still happened, but it wouldn’t be as Dragon Ball related… then again though, maybe Funimation still would have screwed up and said that they did not use Vic because of the investigation. Who knows?

I may never own Dragon Ball Z. I want to… but I just… I have no idea what to get and when I should have bought it, as there are so many versions that are just… eh?