Saturday was too awesome. Sunday shall surely suck. Maybe we should just watch Saturday TV again through the sheer awesomeness of DVR?

Wait… no DVR? Oh, so you recorded Ponies, and Day of The Doctor using a VCR. How very Timey-wimey of you?

Wait… not even that? Well, thank goodness. Just think of how spacey wacey that would be. Well I’m sure that with the vast awesomeness of ‘The Internets’ that you will find a way.

Before you watch The 50th:


This mini episode features a rare look at the 8th Doctor, who had only previously been seen in one movie.

Before you watch MLP Season 4 ep 1: I would strongly suggest that you watch the first two episodes of Season 1, first two of Season 2, episode 10 of Season 3 as well as the last episode of Season 3. Oh, and for the hell of it, The Equestria Girls movie.

But What if I DON’T care about constantly regernating lords, and colorful quadrupeds:  Get The @^DU OUT! no, kidding. It’s cool. The little Clyde robots came back in a new Toonami bump. That’s pretty nifty.

Okay… Still don’t care: Well aren’t you an awesome person, bringing everyone down just because you don’t love what they are constantly messaging about until doomsday. Good for you? Well, here’s some tips for cooking your turkey next week. There is also Kotaku’s Moneysaver in case you were worried about Black Friday. The Humble Bundle if you want to play some great games on your mobile device for cheap, while you wait in line to shop on Thursday night… Still here? I dream of Jeannie is on crackle, but their first episode is season 2 episode 1.

None of that information helped me: THEN WATCH SOME SOUTH PARK! Full episodes, streaming. There! If that’s not enough? Read a book? Take a walk? Whatever. 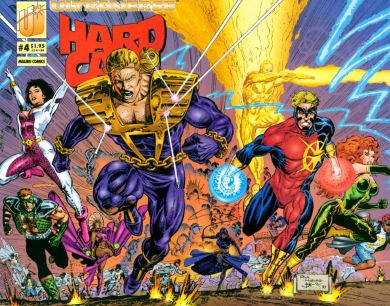 Never heard of Malibu comics? Really? they were quite Popular in the 1990’s, and at one time they were ranked #2 in the industry, outranking even DC comics. They had many licensed properties such as Star Trek and Mortal Kombat, Project A-ko, Robotech, etc.

Okay, well maybe you remember some shows and movies based on their lines? The most famous was probably Ultraforce. This cartoon was based on their popular super hero stories, and their universe was known as ‘The Ultraverse.’ How about Night Man? That was a live action show that was about a super hero who was also a musician.

Still not ringing any bells? Okay. The Men in Black. There. Happy?

Malibu comics is now a defunct brand that is owned by Marvel comics. The artists who worked at Malibu owned a part of their creative work, and if Marvel were to use the characters and their worlds they would have to pay the creators a percentage based on the original contracts they inherited from Malibu.

Before the characters were locked away, Marvel tried relaunching many of the books in their own style, as well as having them crossover with major Marvel characters. Most of the books suffered in one way or another, so it might be a good thing that Marvel can not use the Malibu characters presently.

Due to a non-disclosure agreement, Marvel is on egg shells when it comes to talking about the exact reasons they can not use the Malibu characters. Since Malibu Comics seems to have never released any Trade Paperbacks, the only way to read their comics is by purchasing the single issues on websites like ebay.com, Amazon, or by perusing bargain bins in old comic stores. Because of this, I, a 28-year old man, barely even know these characters who look so amazing.

The two characters I remember the best, were Mantra and Prime. 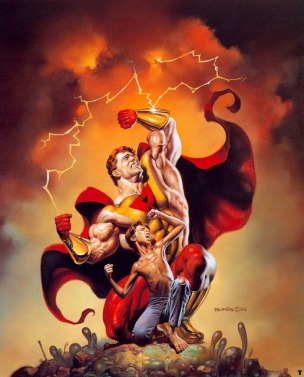 Mantra was a male soldier who, while being ressurected quite a few times prior, was resurrected into the body of a woman in order to learn Magic. She was the bad girl type, and since she was possessing the body of an adult woman who had had kids, you had that whole extra awkward aspect as she dealt with that.

Prime, on the other hand, was a kid who, similarly to DC comic’s character Captain Marvel, could transform into an adult superhero. I loved his first story where he tries to impress a girl from his school that he likes. The girl naturally believes that Prime is creepy, due to the fact that he’s an adult and she is under age.

Since once again, Marvel seems unable to even re-print these stories, I felt that their past existence should be honored in some way.

My roommate David Scott and I have taken it upon our self to make a podcast. The Result? Words are Bullshit. I will e making a special page soon for Words are Bullshit on this blog specifically for it. It was really fun making this one, and I hope everyone enjoys it! 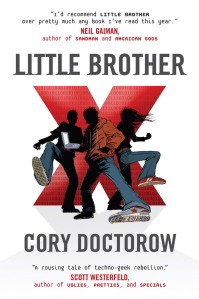 The book Little Brother is phenomenal! I just finished it moments ago, and I think I have to agree with Neil Gaiman’s review of it being the best book I’ve read all year! It was released in 2008, and despite my roommate owning a physical copy, I ended up coming by it thanks to the Humble Bundle’s second e-book bundle.

Basically, this is a story about a group of 17 year old kids who live in an already highly surveyed area skip school and end up at the site of a horrible bombing in San Francisco by terrorists. They are abducted, treated horribly, and there is a twist I wont go into. The main character has to deal with the fall out of this terrorist attack as he decides what he is going to do as he himself is watched for suspicion or terrorism.

I could speak to great length about how this book captures perfectly the paranoia of a post 9-11 world on both sides; The Department of Homeland Security and everyone else. I’m choosing to let this book speak for itself. Since this book has come out, events such as  The 2012 Aurora shooting, The Boston Marathon Bombings, Sandy Hook, and others have happened and we keep realizing that the world isn’t what it seems.

I can not properly transcribe the importance of this interesting and enjoyable book. This book, for me, is up there with Steinbeck’s The Moon is Down… so to reiterate… read LITTLE BROTHER!