It’s been hard to focus on anything dorky, especially online in this, The Age of Corona, especially post the death of George Floyd, the man who was murdered by a pro MAGA Police Officer who had his knee of Floyd’s neck for 9 minutes, resulting in George Floyd’s death. 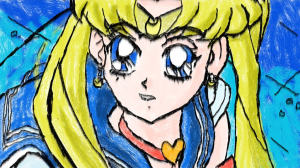 Then the protesting. Then the looting. Then the rioting. Right before the world continued to go %^&*ing crazy, I did the Sailor Moon Redraw challenge… but it wasn’t that awesome. I then did a redraw just for fun from The Last Unicorn, and yeah… I don’t love it, but I drew it! That’s… uh… something!

A friend of mine, Marzgurl, did a video for GameXplain on the new Shantae game! And… is being attacked thanks to people who are upset that she caused Covid-19 as an extra layer between them and Vic Mangina’s… uh… Man-gina?

US Astronauts launched back into space for the first time from an American space craft, created by Americans, thanks to South African born richy rich smart guy Elon Musk & Space X! Suck it Space Force… that is also now a Netflix show starring Steve Carell!

There was MerMay, which I sadly did not participate in very much. I bought some art both physically in the recently re-opened mall, as well as from Kittyhawk of Flounder… but sadly not as a mermaid. Boo! 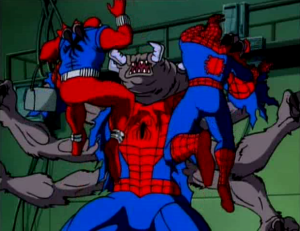 Covid-19 has really effected me on an emotional level. How it’s been handled, how my job asked me not to mention having it, customers refusing to social distance, and I just couldn’t take it anymore. I stepped down from a supervisory role at my job, and hopefully the gray hair I’ve gained over more than half a year will regain it’s base form Goku luster. Probably not though.

Mangaka Hiroshi Aro did some new Futaba-kun Change art that someone commissioned him to do. I wish I knew how to  commission him.

Currently Police officers are beating/shooting/arresting journalists, senators, shoppers. Meanwhile, they have been joined by the National Guard, and they have shot white home owners standing in front of their own yard.

Oh, and She-Ra kissed a girl and liked it, continuing the trend of homosexuality in the last episode/season of a major character because they knew that that that’s too late to get them in trouble.  Legend of Korra says hi. Sailor Moon wonders… what took you so long?

OH! On the same day, Harley Quinn and Poison Ivy swapped spit on her show? But that’s to be expected?

I just want to play Clubhouse Games™: 51 Worldwide Classics already. That game comes out this week. I also bought a capture card that’s coming in the mail soon-ish… so maybe I will make some video game videos or stream? I dunno. Expect some art this month too, as I continue to get used to drawing on a Surface Book. 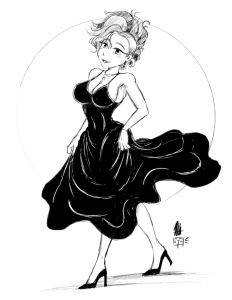 Doesn’t every girl deserve a sexy black dress? Kittyhawk thought so in my latest commission from her.

Maybe you are new here, and are unfamiliar with the blue haired Mohawk woman I like to refer to as Flounder?

The Little Mermaid’s Flounder has been a character that I have often commissioned and even drawn myself. I like to draw/ have him drawn as a female mermaid, after discovering an article that had a bunch of gender bent Disney princesses created by sakimichan, and only seeing a happy Flounder with longer lashes and a flour in Flounder’s… well… it looked like hair? Go check it out, as the art is awesome! 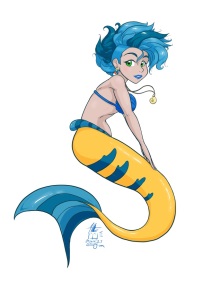 After seeing the pieces, it made me search for a mermaid version of Flounder and a fish version of Ariel, as certainly that role reversal just HAD to be a thing… right? Not… really? So I did a mock up in gimp with many different photos stitched together, and that… that wasn’t enough really, so I then tapped one of my favorite web comic artists, Kittyhawk.

Her original piece can be found to the right. It’s simple, and nice… but the crazy thing about having something commissioned is that it’s a bit addictive. I’ve since had many pieces commissioned of Flounder by a few different artists including more from Kittyhawk, Cluedog, GroundNova, Sukesha-Ray, and Frog50.

But this isn’t about the MERMAID Flounder, but her human bits. Eww… that sounded dirty. Anyways, I was this first to draw human Flounder in the image below. Next to it was GroundNova’s take of Flounder in a traditional Princess dress. The most recent image, of course. 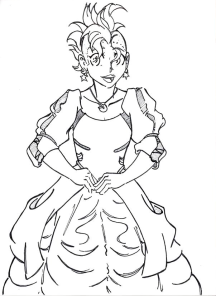 So, Flounder as a Human. Hmm… not a good way to start off MerMay, but oh well.

I showed off the Kittyhawk image of Evelyn bursting out of my hoodie last week, and I thought that it would be fun to re-show some of the art of Evelyn for this Mer-Monday!

Evelyn started out as just my favorite female name, and then ended up being the female avatar incarnation for myself… because I am not a fan of my first name feminized.

I didn’t give Cluedog a lot of direction, and eh… the art looks rather nice, especially Evelyn as a human.

Web comic artist Kittyhawk had done some work on a Disney related project, and since I had been plugged into her network, I might as well have that honor of commissioning her for it. Since I’ve shown the mermaid of her, below is the two other pictures of her. Who knows, maybe one day, I’ll have more art of Evelyn.

Evelyn has been described by others as a Muse, which was humorous to me at the time, but the latest picture of her… she’s showing a lot of cleavage… for all I know… hmm… She could be a mermaid inside off that hoodie, or my chest? Maybe she is chest bursting and my body is the bottom part of her fin OH LORD THAT  WOULD BE TERRIFYING! So um…

Demi Lovato is apparently making headlines on her new song “I Love Me,” which is about self love. I previously mentioned her views when a fan of hers turned her into a mermaid in some fan art that she didn’t approve of, which can be found here: https://netsenshi.wordpress.com/2016/10/10/disney-star-upset-about-mermade-ification/

I mentioned the fan art, because it shows the same side of Lovato that this song does. That she’s sadly really good at beating herself up over her appearance, meanwhile others find her beautiful. To this fan, I’m sure that this is how she looks to them… that being said, all she thinks is ‘this is how I am supposed to look?’ Anyways, I thought I’d use this music video as a reminder of a previous blog article… because… I don’t listen to a lot of her music, and became aware of her outside of it?

What the heck is this? Umm… NSFW cause of explicit lyrics? Happy Mer-Monday everyone? 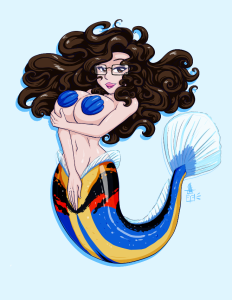 Evelyn The Mermaid makes a comeback, seeing as how she’s both colorful and well… me as a woman mermaid? I don’t know… it’s just an excuse to post this art that LGBT webcomic artist Kittyhawk drew of/for me!

I hope everyone has a happy and proud PRIDE month this June!

Okay… So… That title doesn’t work, and this version of Flounder isn’t even a mermaid in this piece… but whatever. Happy Mer-Monday! Enjoy this doodle I did the other day! 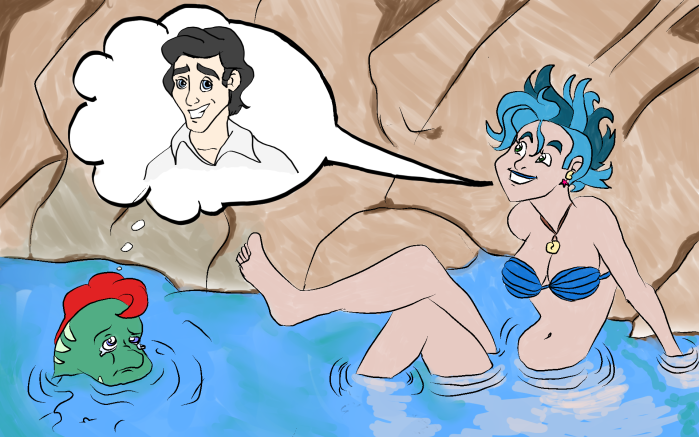 It’s Sunday. A useless and boring day that I have failed to protect people from lately… sorry for that? I’ve been busy #kicking and #standing and being barely able to walk to spending WAY too much money recently to walk more comfortably!

So… what should people do on a day where there is no Chick-fil-a to gorge on?

Halo! Yes… this is an easy cop-out answer. Halo: The Master Chief collection has been announced for PC, and apparently Halo Reach is coming along with… so now might be the proper time to refine those skills that at SXSW made it possible to pay the bills… for someone who is not me. I was only ever all right with Halo 3.

Kingdom Hearts III… Okay… so just because Halo has was able to make the jump from Xbox to Xbox 360, that doesn’t mean that we should pick on Square Enix’s Disney baby for skipping from PS2 all the way to near the end of the PS4… right? Really… almost any Kingdom Hearts will do, as there were a ton of sequels that could even be better than this jumbled up non-sense that tried to tie all of the handheld spin offs into something coherent.. on second thought… maybe Kingdom Hearts 1 or 2 is more worth playing at this point. 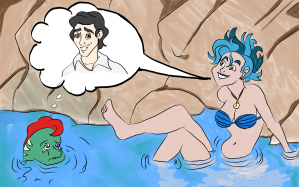 Work on your fanfiction! Seriously… Kingdom Hearts making a mockery of things people take seriously… such as Winnie The Pooh and the Greek demi-god Hercules, might ensure that Tetsuya Namora is going to go to hell… but not every fan fiction has to be terrible! Or maybe you are more of a fan artist who likes drawing Flounder as a girl so he can kiss all of the boys? No matter what your outlet is, let those creative, yet still derivative, juices flow! Who knows, maybe you will be the next Stephenie Meyer!

GREEN THE EFF UP! Seriously… it might be Sunday, which is the day Christians should be celebrating their lord and savior, but it’s also St. Patrick’s day… so whatever you do… 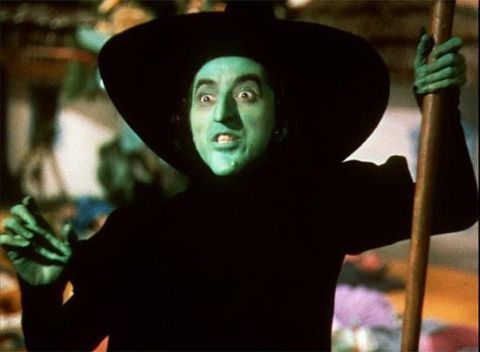 I, personally, will be celebrating by ignoring my responsibilities, staying inside on what is also the last day of Spring Break, and watching maybe Gangs of New York… and/or Robin Hood Men in Tights… cause IRELAND! UGH! 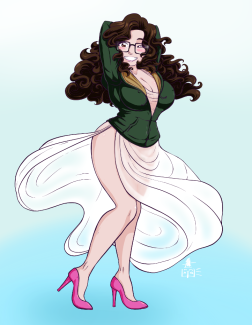 Or web comic artist Kittyhawk does, I should say. I had her draw a version of myself that a few people argued looked like a ‘muse.’ This gender bent woman who wore a hoodie was known as Evelyn. She was decently popular, and even helped Kittyhawk get a few extra commissions from eager people wanting their own… Evelyn, or whatever.

When the time came to commission another version of Evelyn, I knew I was pretty sure that I possibly kind of wanted her to be a greek Muse.. maybe.. or a mermaid? One of the two… certainly.

Kittyhawk thought that Evelyn as a mermaid would be more fun to draw… so BAM! Mermaid Evelyn!

I don’t mean to brag, but that’s one nice piece of tail there. Her tail is based on The Red Head Solon Fairy Wrasse fish. I feel like Kittyhawk did a really great job!